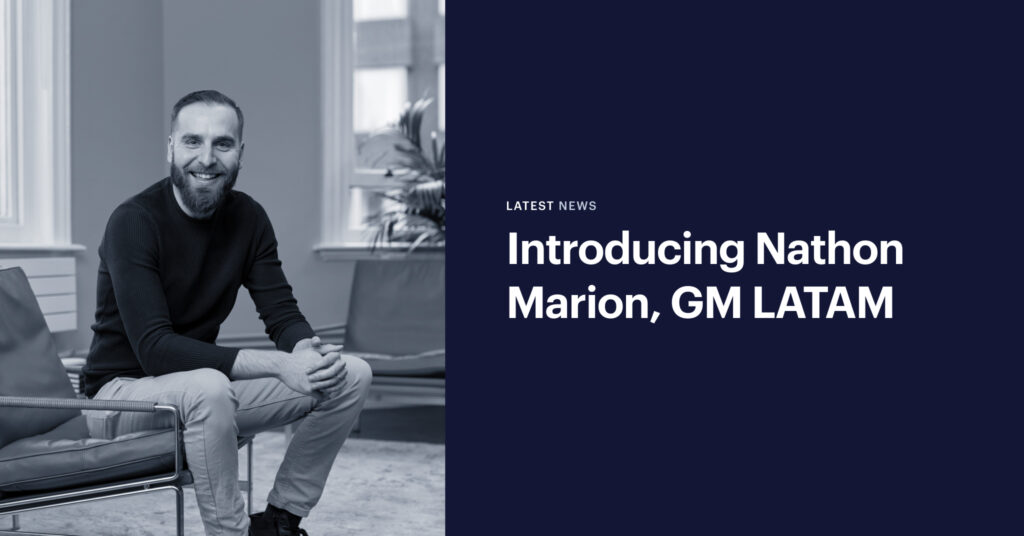 Nathan Marion, our new General Manager LATAM, discusses aspirations for his new role, the state of payments in Latin America, and what attracted him to Volt’s real-time revolution.

Nathan, tell us about your new position

In the world of real-time payments, Brazil stands as a shining example. What makes its instant payment scheme, Pix, remarkable is its immediate adoption. Despite only launching in November 2020, 120 million people – more than 60% of Brazil’s population – already use it.

Integrating with Pix creates a huge opportunity not just for Volt, but for international merchants. By the same token, it marks a significant development for Latin Americans in general. My first goal is to make sure we’re successful in Brazil by having the best Pix product, to leverage the learnings of Open Banking in Europe and the UK, and to help our merchants enter Latin America’s central economy.

Latin America is a thrilling environment. There are big challenges in payments – economically and politically – but this generates resilience. Problems are tackled by amazing companies with amazing ideas and solutions. That’s part of the reason, in my view, for Latin America being one of the fastest-growing venture markets in the world.

What is it about Volt’s Pix product that excites you?

I see a beautiful connection between Volt’s central network to the world’s real-time payment networks and Pix: an incredible development with sky-high adoption. Our Pix product is extremely strong in that it utilises a best-in-class alternative payment method while creating huge opportunities for any global merchant.

That’s our main objective: to help merchants sell to Brazilians in the local currency, using a local and popular payment method that already reaches the vast majority of Brazil’s digital population, and without any of the usual logistical and cost challenges.

What are some particularly strong Pix use cases?

Volt’s Pix integration is perfect for online businesses and PSPs that want to expand to Brazil, but particularly digital services and goods, crypto, gaming, travel, entertainment and retail.

Lots of gaming companies are looking at Brazil because of its large domestic market. Most players are young and without access to credit. They’d rather pay in a very simplistic form.

Pix is an easy way to access this market, in a cross-border model, while giving players the option to pay in their own currency. Historically, this was very complex – international merchants selling to Brazil had to use dollars. To pay in dollars, consumers needed an international credit card – meaning much higher costs and low market penetration.

Because Pix works in real time, eliminates card fraud and has no chargebacks, you can see why it’s so suited to travel. For OTAs, many of which are looking towards Brazil’s huge domestic market, it represents a faster, more secure option.

Retail is worth mentioning too because around 20% of all e-commerce purchases in Brazil are cross border. Consumers are used to ordering goods from overseas. And, from an import tax perspective, it’s becoming easier.

We’ll see more use cases as Pix continues to evolve. Developments such as Pix Garantido, expected to launch in 2022, will allow Brazilians to pay in instalments – propelling adoption for payments in industries with high ATVs. Another example is Pix Debito Automático, a Direct Debit equivalent that will unlock business models like subscriptions.

How big is the LATAM opportunity beyond Brazil?

What drove us to Brazil was Pix’s huge level of adoption – it’s a thriving market. Latin America more generally is such a vibrant region for fintech. We’ll look at its other economies based on the size of the opportunity for our merchants and the level of real-time payment infrastructure maturity.

We’re already seeing merchant interest in the wider LATAM region. I see our next step, once we’ve grown our Brazilian footprint and established the Volt brand locally, as looking at the next one, two and three countries that we can help international merchants tackle.

Tell us a bit more about your background

My background is sales, tech, digital commerce and payments – these are my passions. I spent six years at Adyen, back in the early days of its LATAM expansion. We built an extremely successful operation that now has more than 100 people, and which became part of the international team at Adyen’s Amsterdam HQ. One of the things that attracted me to Volt is the number of payment experts and former Adyens who work here – I know the potential of these people.

When I later moved to VTEX the ambition was to make a Brazilian tech company go global. I initially advised on international expansion before becoming VP Growth Enablement. I helped it go from a little-known company outside of Latin America to a unicorn that went public on the New York Stock Exchange (NYSE) in 2021.

I’m a builder. I like being part of something that’s disruptive. A combination of this, a first-class founding team and an amazing product is what attracted me to Volt. I’m relishing the challenge.