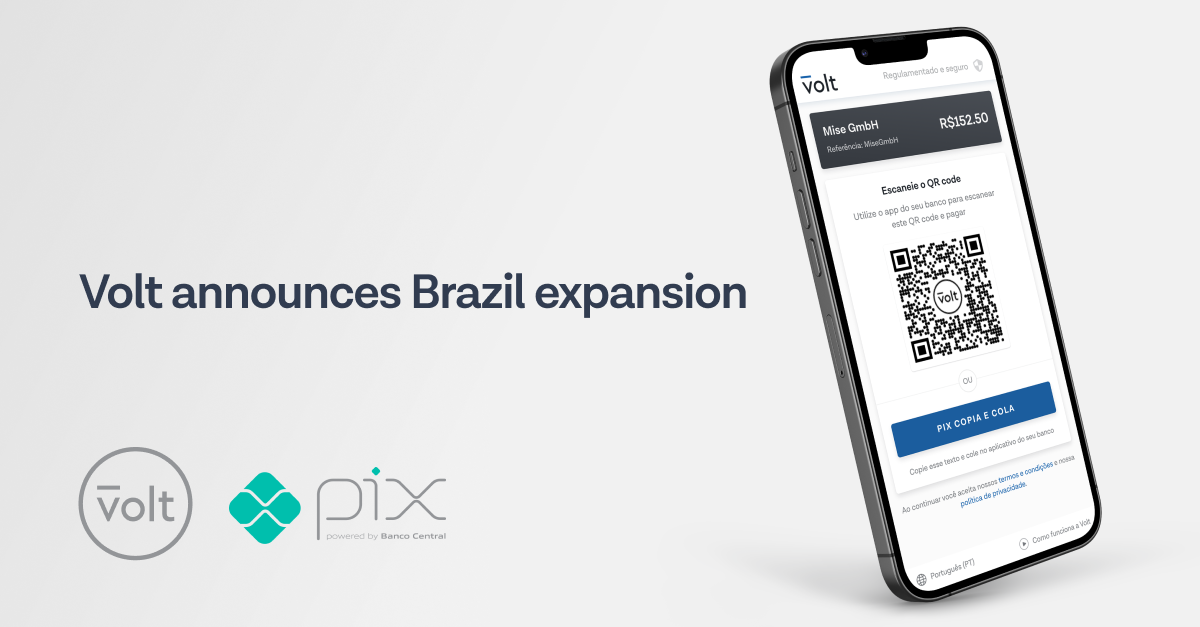 São Paulo, November 11th, 2021 – Volt, the leading open payments gateway, today announces its expansion to Brazil following a period of rapid growth for the fintech company. Volt has now integrated Brazil’s domestic instant payments network Pix – and established its physical presence in São Paolo – as it builds upon its proposition as the global leader in real-time payments everywhere.

Already strongly established in Europe with over 5,000 bank connections on the PSD2 Open Banking network, the expansion sees Volt bring its real-time payments offering to the Brazilian market. Volt customers can now access Latin America’s largest and fastest growing markets, whilst cutting out the region’s lengthy settlement times (from 28 days to two seconds) and costly card infrastructure, and boosting payment conversion rates. For those without a domestic presence, Volt acts as the merchant of record in-country and manages currency export, FX and declarations to the Central Bank of Brazil.

Since its inception in November 2020, Pix now has over 90 million active accounts, with over 500 million BRL processed in October 2021, making it the digital payment method of choice for Brazilian consumers. This pace of growth only continues to rise, with over 17 million new users registered between September to October 2021 alone. Now, merchants and payment service providers (PSPs) in the region can unlock a faster and more secure way for their customers to pay by integrating Volt.

Following the company’s record-breaking $23.5m funding round – the largest Series A on record for the Open Banking industry – the announcement marks the latest step in Volt’s expansive growth plans in response to rising demand for real-time payments everywhere.

André Faria, Ex-Adyen VP and Volt Founding Director, LATAM, comments: “Brazil’s rapidly growing e-commerce market and traditionally underserved customer base has created a landscape ripe for payments innovation. A year since its inception, we have seen a stratospheric rise of the Pix platform with unrivalled consumer adoption. By building on this already well-established instant payments network, we are enabling both domestic and export payments for local and international businesses – whether they have an on-the-ground presence or not – at the speed of now.”

Tom Greenwood, Founder and CEO at Volt, comments: “Pix is a shining example of the power of instant payments, creating a huge opportunity for ambitious global merchants. From NPP in Australia to Singapore’s FAST network, real-time payment networks are developing at an unprecedented pace across the globe. Our decision to expand into Brazil aligns with our ambition to unite these disparate and often fragmented systems into a single and unified payments interface through which merchants can receive payments account-to-account and in real time.”

Founded in 2019, Volt is building the infrastructure for global instant payments. Today, its open payments gateway allows merchants and PSPs to process transactions securely between accounts held at more than 5,000 banks in the UK and EU. Volt’s unique aggregation model provides unrivalled open payments reach and maximises the speed, security and resilience of transactions.

To find out more about Volt’s integration with Pix, and how to start accepting instant payments in Brazil, please email sales@volt.io.

Pix is a shining example of the power of instant payments, creating a huge opportunity for ambitious global merchants.

Contact the team to learn how to supercharge your payments.

Thanks, we've got your message.
Someone from the team will be back to you soon.
Oops, something's gone wrong. Please try again.
get in touch
Contact us
Get started