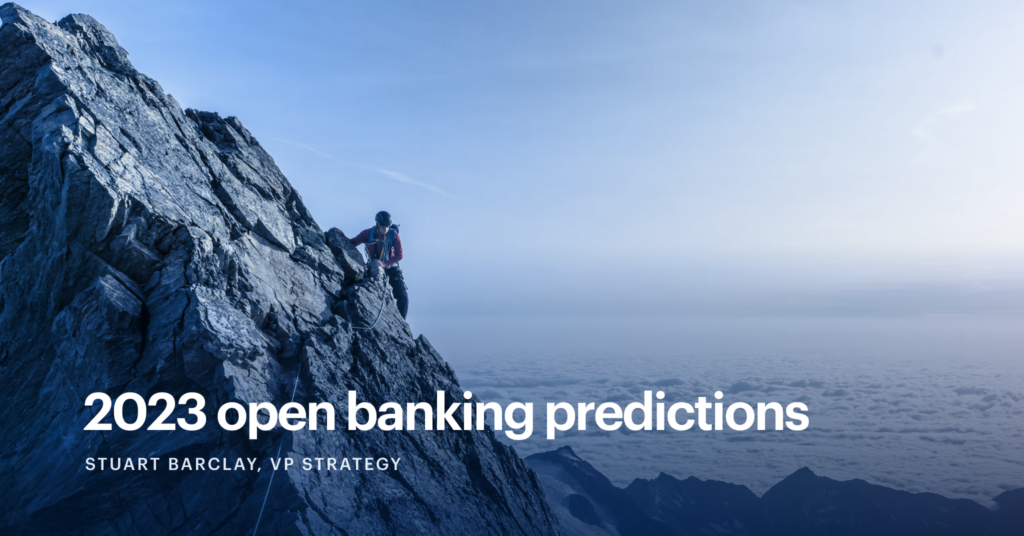 What does the next 12 months have in store for open banking? From adoption and regulation to consolidation and education, these are my predictions for the new year…

Continuing its march up the slope of enlightenment

In 2023, open banking will continue its high-paced march up the slope of enlightenment – a term borrowed from the Gartner Hype Cycle. Emerging technologies, it says, pass through five phases. The first, innovation trigger, was marked by PSD2 and TPPs developing ground-breaking open banking products. The second, peak of inflated expectations, describes the hype around them. Open banking would forever change how people pay and businesses get paid.

The third, trough of disillusionment, marks the point at which hype is replaced by doubt (look no further than Starling Bank Founder Anne Boden’s statement to the House of Commons Treasury Select Committee in October 2021). But now, with forward-thinking regulation and problem-solving products, and with VRPs on the horizon, open banking is firmly en route to becoming mainstream.

It’s in merchants’ interests to push open banking, but widespread adoption will depend to a large extent on consumer education. Fraud is among the topics that should be discussed more, owing to open banking’s ability, compared to cards, to dramatically reduce it.

Its provision shouldn’t rest with merchants alone, but open banking payment providers – either themselves or by working with vested organisations. The successor to the Open Banking Implementation Entity will have an important role to play, too – though it will need to decide exactly what its remit is.

…but increased adoption will happen organically

Consumers will quickly find themselves getting used to direct bank payments as more mainstream e-commerce brands integrate open banking. They just need to feel comfortable when they click or tap on that first step and it goes to their bank. This is currently where the biggest drop off is, and which education can help to overcome. Commercial VRPs becoming a reality will massively help with adoption, too.

The next wave of open banking will bring banks in on the game. Until now, several have viewed it as a regulatory exercise rather than a commercial opportunity. It’s time for them to be brought into the game so they can benefit. That’s what we’re seeing with commercial APIs and services that go beyond PSD2.

Talking of regulation, I’m looking forward to seeing the impact of mandating instant payments in Europe – the biggest regulatory change in open banking since PSD2. This will be huge because, if you have a ubiquitous instant scheme, the risk associated with open banking – essentially ‘I’ve made a payment but I don’t know where it is’ – disappears. For product businesses, this means the instant release of inventory.

The quality of bank APIs is variable, and payment schemes are inherently domestic. At Volt, we’re interested in interoperability between these domestic schemes, which would result in parity with card payments – the same experience wherever you are, and the ability to accept payments everywhere.

Quality issues can be tackled with strong regulation. Local regulatory bodies need to get tougher. In the meantime, we’re going some way to solving the issues ourselves with contingency, routing payments in the fastest possible way and working closely with banks.

The needs of high-margin businesses are different to lower-margin ones. For financial services, gaming, trading and crypto merchants, their biggest concern is usually the deposit experience. They want to optimise conversion, which open banking can do by pre-populating payment details and removing card limits.

While e-commerce merchants, by contrast, also care about conversion, they’re also very focussed on reducing costs and managing fraud. Cards are expensive. Card fraud is prevalent. How can their costs be reduced, and high fraud rates overcome, while conversion rates are maintained? This is increasingly how these businesses reach out to Volt.

Expect consolidation in the market

The open banking market, as it continues to mature, will consolidate in 2023. This is good news for merchants. With fewer competing messages, open banking services will be easier to understand. Further, the messages that remain will come from established players with tried-and-tested products.

Consolidation will help consumers, too. They’ll see the same few trusted names on merchants’ checkouts. As it stands, different open banking providers have slightly different messages in terms of how they talk about open banking and the unique value it brings. In 2023, there’ll be fewer of these conflicting messages in the market.