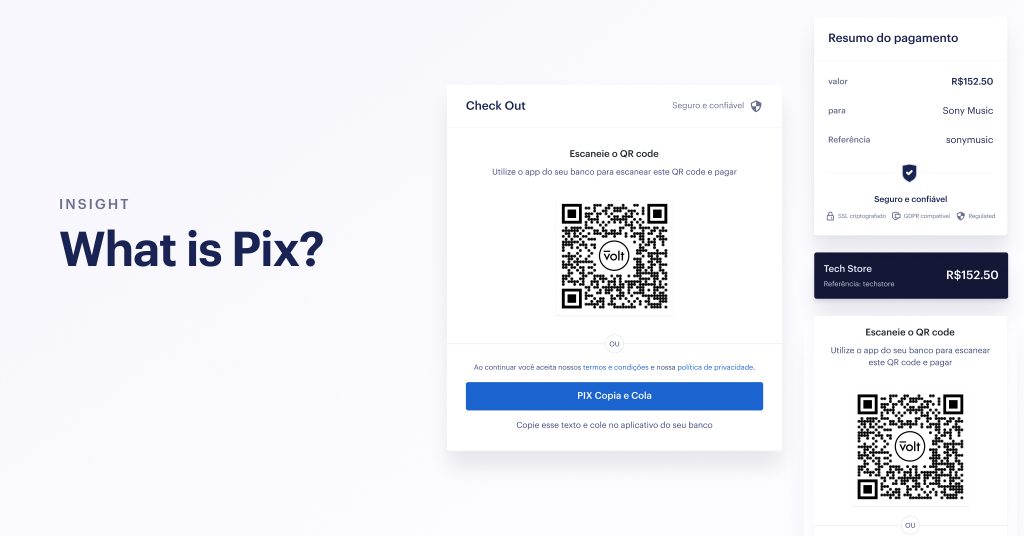 What is Pix and how is it driving Brazilian e-commerce?

The Brazilian real-time payment scheme is unprecedented in its acceptance and already represents an important share of e-commerce sales, bringing significant gains for businesses.

Among the world’s top 10 largest economies and populations, Brazil is a leading source of innovation in several areas. A good example is the financial system: decades of hyperinflation have created resilience and a culture of agility and flexibility, driving the development of solutions that simplify the financial ecosystem and funds’ movement from one end of the value chain to the other.

In November 2020, the introduction of Pix, the Brazilian real-time payments system, was a milestone in the modernisation of a market that was already quite advanced compared to the rest of the world. The acceptance of the instant scheme has been snowballing. According to the Central Bank of Brazil, at the end of March 2022 there were 124.4 million registered users (among individuals and companies), who moved R$784.7bn across more than 1.6 billion transactions.

Nothing indicates that real-time payments are close to finding their point of stability in Brazil. A study by ACI Worldwide estimates that by 2026, instant payments will account for 2.08% of the national GDP: the largest share of real-time payments in the economy of any country in the world.

The growth in the adoption of this payment paradigm is due to several factors:

According to the report, in 2021 alone Pix brought about $5.7bn in savings to businesses and consumers, unlocking about $5.5bn in economic gains (0.34% of GDP).

In other words, the resources that were once spent on intermediation activities now unlock value and are used to generate economic returns for businesses and people. This shows that real-time payments are a growth force in the economy.

Before Pix, businesses and consumers had several electronic transaction systems at their disposal for P2P transfers. DOCs and TEDs have limitations regarding opening hours and the time it takes to complete transactions, which limits their use. Proof of this is that 104 financial institutions participate in SITRAF (the system that regulates the use of these means of payment), while 761 financial institutions have adopted Pix.

Pix immediately became a real-time payment option for offline and online retail. In addition, the development of a digital payments culture and the speed of transactions contribute to more positive shopping experiences, driving the digitisation of the checkout stage of shopping.

One of the powerful advantages of Pix (and real-time payments in general) is its ease of use. From the bank’s mobile application, simply enter the recipient’s key (or use a QR Code) and transfer the desired amount. This ease of use means Pix represents a significant proportion of all payments made in Brazil; month on month it’s breaking new records, becoming the most-used form of payment.

Since being introduced one-and-a-half years ago, Pix already accounts for 11.5% of e-commerce transactions in Brazil – and it will grow even faster as new functionalities and possibilities are introduced, like instalments and Direct Debit. For e-commerce, the use of real-time payments brings many advantages – some more typical of the Brazilian market, others that apply to companies anywhere in the world.

1. Elimination of chargeback and e-commerce fraud

Compared with credit transactions, real-time payments have the advantage of eliminating the risk of fraud and chargeback. Consequently, retailers lower the risk of their transactions and speed up the sales approval process.

For users to buy online in Brazil, they need to either have a credit card or use a cash-based offline payment method called Boleto.

With Pix, anyone with a simple account and balance can now execute an online transaction; as Pix already has more than 120 million users, it covers the totality of the digitally enabled population that no other payment method reaches.

Brazilian e-commerce deals with boletos, a cash-based offline payment method. In the transaction process, the merchant needs to lock its inventory on purchase via boleto until payment is confirmed (which can take several days), so that fulfilment can then take place. Studies indicate that 30% to 50% of all boletos issued end up not being paid, negatively impacting the merchant’s operation.

Credit cards, on the other hand, are an online method; however, since it’s a card-not-present transaction and fraud is an issue in Brazil, approval rates from banks are far from ideal. A Pix transaction has an incredibly high approval rate. It’s also instant for the merchant, who have immediate access to their funds.

The settlement delay in Brazil for credit card transactions without any instalments is D+30, which strongly affects the merchant’s cash flow and elevates the operational cost. On the other hand, a Pix transaction is a fraction of the cost of a card transaction and allows merchants instant access to their funds.

Payment via boletos generates extra operational costs not always measured by merchants. The products must be reserved ahead of payment confirmation, which can take several days. As a result, the retailer must work with higher stocks, demanding more working capital and increasing operational costs. The adoption of real-time payments eliminates the need to reserve products, making the business more efficient.

Brazilian e-commerce grew 41% in 2020 and 27% in 2021 – and part of this movement was driven by the expansion of Pix and the acceptance of real-time payments as a convenient, agile and important solution for the development of better shopping experiences for consumers. In the coming years, we will see strong growth in the use of real-time payment not only in retail but in the most diverse segments of the Brazilian economy.

Interested in entering Brazil’s booming e-commerce market? We’ve integrated Pix into our global real-time payment network. Get in touch to find out more.